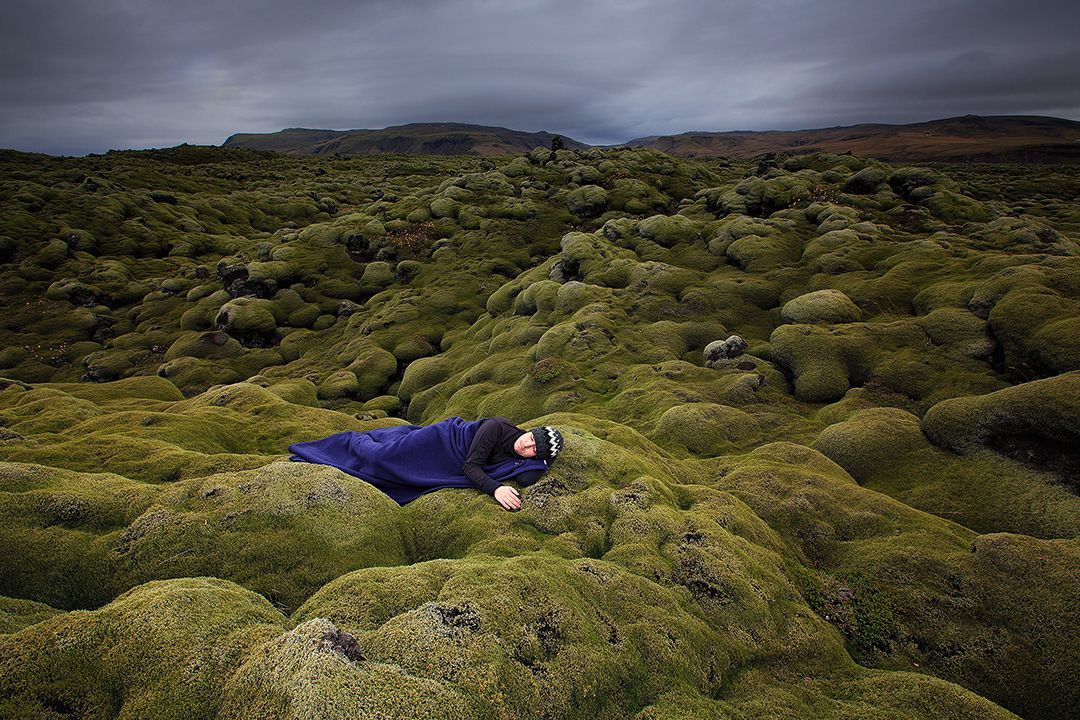 This is not “just” a unique tour, experiencing the untamed beauty of Iceland. We will not stop at showing you the famous and hidden locations but teach you to capture it, so you will share and relive all of it later on. It is amazing how your photographic skills will improve during one of our workshops with inspiring talent.  And en route, your work will be  reviewed by awarded and famous professionals, who will share their tricks of the trade, passion and experience to hone your photographic skills. And meet some great people during the tour!

Join us in our chase of the magical light of the midsummernight. In Iceland we find the arctic beauty of fire and ice. Land of pure expansive beauty, the proud Icelandic horses, the beautiful Puffin will  pose for us in an entourage of wild rocks with many myths and secrets. The Icelandic (mid) summer is a dream for every photographer: changing the nights in the soft light of the golden hour. Up to eight hours is nature immersed in the best light for photography; from dramatic to soft misty gold! This tour throughout Iceland takes us along fjords, waterfalls, lakes, rivers, pure flora and fauna: immersed in the best light of the year. We start of with a private boat tour on one of Icelands only schooners, visiting the nesting puffins and with luck encountering dolphins and whales on our way. A great kick-off to meet Iceland. 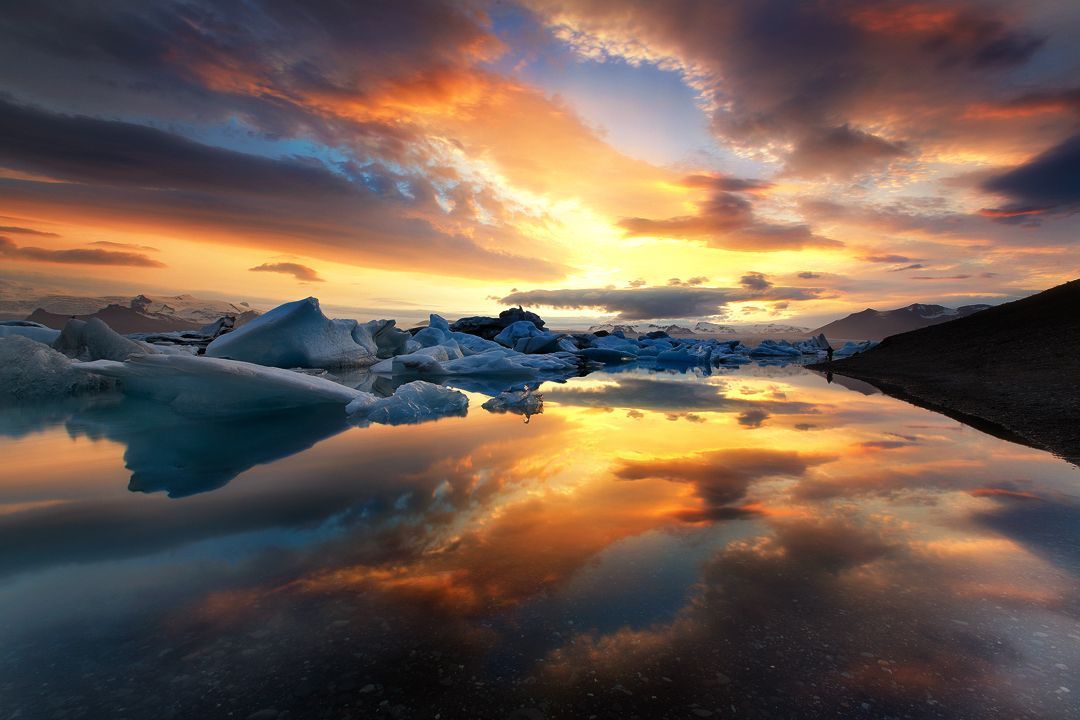 Together with Icelands award-winning nature photographer: Iurie Belegurschi, we will experience Icelands magic and learn to capture it as a pro. In the 7 years that Iurie lives and works in Iceland, he tutors highly popular workshops sharing his talent and passion with photographers- ranging from amateurs to professionals. You will see well hidden locations only at the best early light; a reason why people keep coming back for his workshops. In all comfort we will capture the unique beauty of Iceland plus the favorite spots of Iurie, in a small group of 8 to12 guests. You will be guided by an awarded team of two Icelandic pro photographers (Iurie and a collegue), Dutch photographer Marion La Pierre and your private Icelandic driver/guide who knows the country by heart.
This workshop is suitable for both amateurs and professional photographers. We will advise you in advance on the right camera equipment, and provide you with tips and information. We will catch the early light, share a night shoot to catch the magical midsummer light at its best. The pace will be slow, to make sure all photographers receive their one-on-one time and tuition. During the workshop Iurie and his collegue will teach you different techniques and editing/digital darkroom on location for optimal results. Your work will be reviewed and commented with feedback; a friendly sharktank! You’ll receive a professional photo book with some of your best shots plus the work of art from your team members including the pro photographers. A wonderful memento to relive a unique journey. Price will depend on the total of groupmembers. Ask us for any details.
This trip is 9 days, 8 nights; all-inclusive. Price includes 8 nights in hotels with private bath with double occupancy, all meals, snacks and soft drinks, all transportation within Iceland (including air charter to Husavik and our private Schooner) for your comfort: extra space for your camera gear,  photo workshop Iurie during the entire trip, tutoring darkroom editing and our gift to you: a professional photo book of your trip for each participant.

The tour starts and ends in Reykjavik.

From your home, fly to Reykjavik, Iceland to arrive on May 25, 2015. We’ll overnight in Reykjavik and meet our team at breakfast. After a 45 minute flight we arrive in Húsavík; the whale watching capital in the north. For the next 9 days we will show you the unique beauty of Iceland; the prime spots at best light on our roundtour. Accommodations are based on double-occupancy (we have limited single rooms available, just ask us for details) and all of our hotels have en-suite facilities.  We arrive back in Reykjavik late in the day, where you can fly home or extend your stay for a few days relaxing. Upon request we can arrange helicopterflights to give you an arial view of the untamed beauty of Iceland. 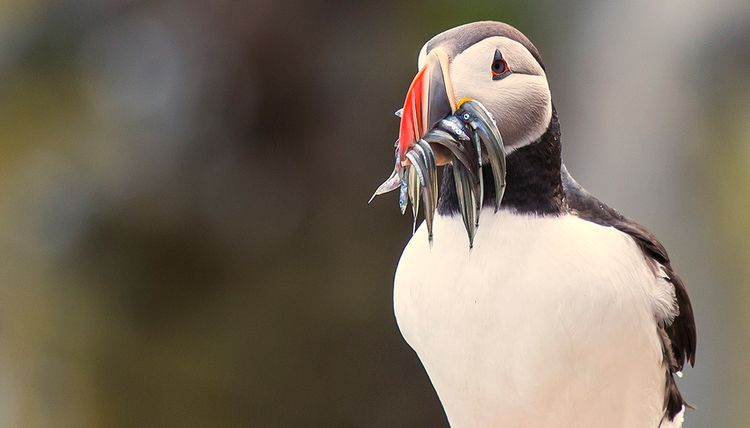 Keep in mind, this itinerary is flexible – we may adjust it based on weather conditions or other factors.

We will depart from Reykjavik after breakfast, and begin our journey. We will hop aboard our private charter flight from Reykjavik City airport to Húsavík in the north. We’ll drop our bags off at our hotel and then climb aboard are own chartered twin-masted schooner for the day (and most of the night!)

Our plan for this day is to sail Skjálfandi Bay near Húsavík, heading first to Lundey or “Puffin Island” where we will find in excess of 200,000 nesting Puffins! We’ll photograph them in their natural habitat, hunting, feeding, nesting and socializing. From Puffin Island we’ll sail westward across the Skjálfandi Bay, towards Flatey Island. En route, we hope to see and photograph the many whales that are normally found here at this time of year. Minke and Humpbacks are commonly seen, and if we’re lucky, we’ll catch White-beaked Dolphins or Harbor Porpoises! After a short sail across the bay, we’ll arrive at Flatey Island, home to thirty of the thirty-seven species of birds found in Iceland. We’ll disembark and have the late afternoon to photograph. Weather permitting, we’ll have an on-shore feast for dinner. After dinner, because the sun won’t set until 10:30pm, we’ll be able continue photographing the puffins as they get sleepy. After sunset, we’ll hop back on our schooner and head back to Húsavík and our hotel. 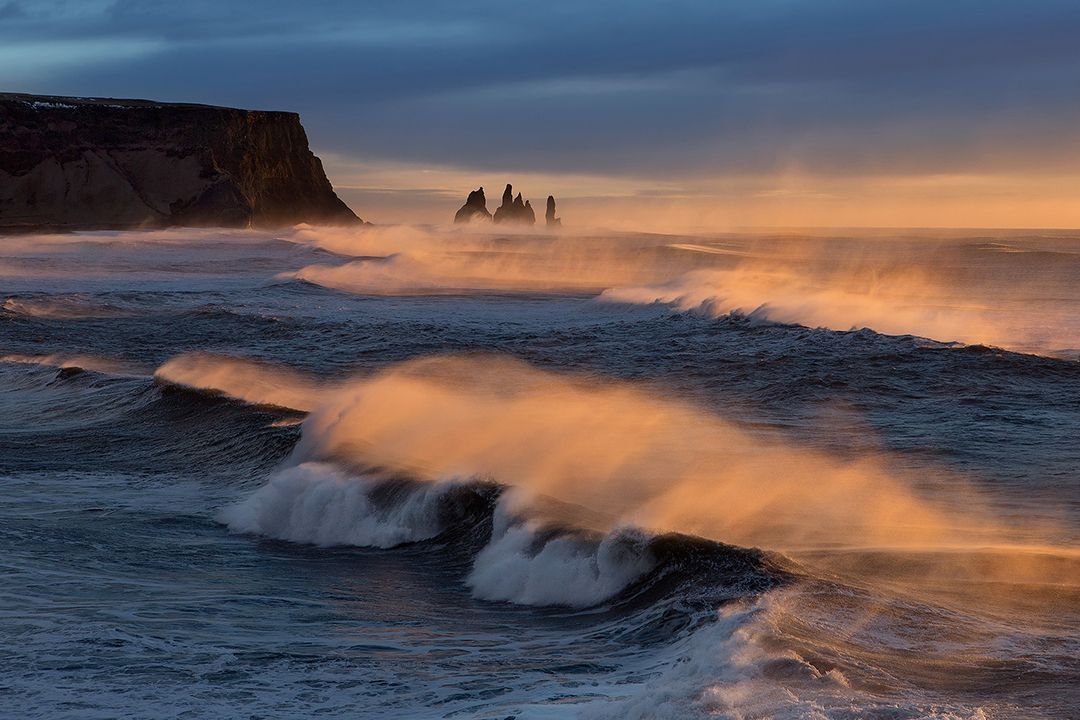 Sleep in a little bit, and after a late breakfast we’ll have our first critique session through lunchtime. After lunch you have time on your own to explore the harbor town of Húsavík, photograph the goings-on, shop a little, or take a powernap before dinner. After dinner, we head out chasing Iceland’s “Midnight Sun” – we’ll shoot sunset, and stay out until sunrise! A long day, but well worth it and extremely photographically rewarding. 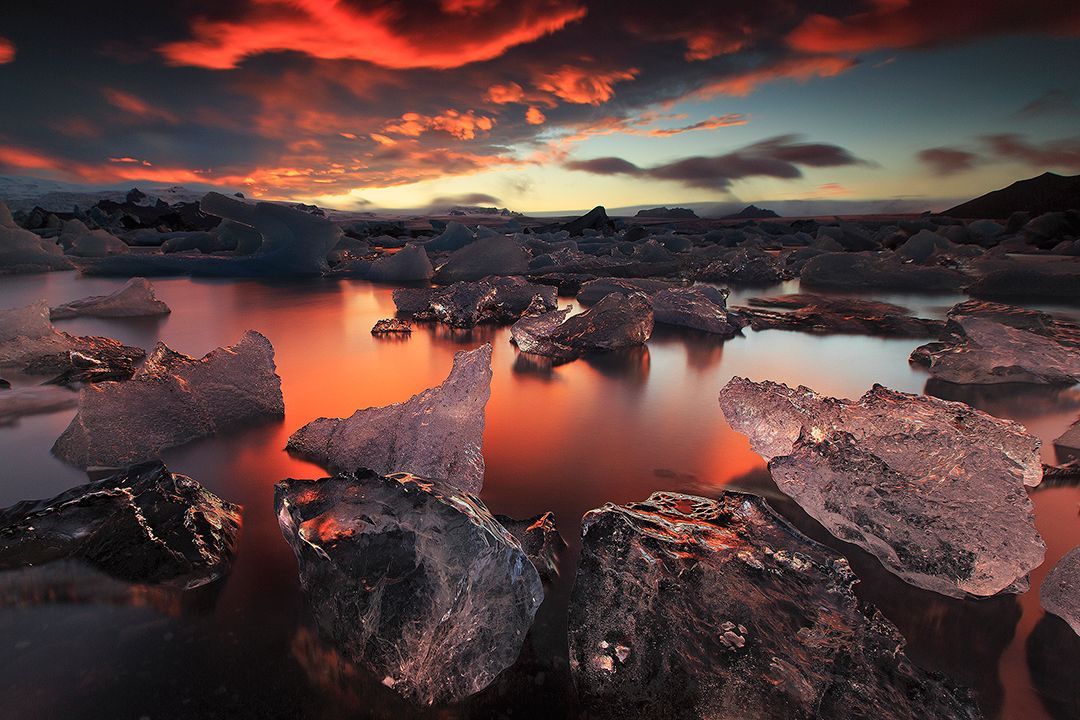 We’ll sleep in again and after a late check-out, from Húsavík we’ll take a very short drive (less than one hour) to Mývatn. So much to see and do here, our itinerary will be flexible based on time, light and weather.Mývatn is a town famous for its beautiful lake with many small islands in the north of Iceland. Some of the islands in Myvatn are pseudocraters, formed by steam explosions. The lake has plenty of birdlife and more species of ducks than anywhere else in the world. We plan to rejuvenate and refresh at the Mývatn Nature Baths, giving us the peace and energy to continue working so hard for the next seven days! In this area we can also see and photograph the Krafla caldera, and Viti (meaning ‘Hell’) in Krafla, which is an explosion crater. The diameter of the crater is around 300 meters and it has a green lake inside it.

We will photograph Goðafoss waterfall, located in the riverSkjálfandafljót in North Iceland. It is one of the most spectacular waterfalls in Iceland, falling from a height of 12 meters over a width of 30 meters. The falls’ name means either waterfall of the gods or of the ‘godi’ (i.e. priest/ chieftain). Another waterfall that we may be able to visit is Aldeyjarfoss, a beautiful waterfall in the mighty Skjálfandafljót river, dropping from a height of 20 meters. Of particular note is the contrast between the giant black bent basalt columns and the white water of the fall. 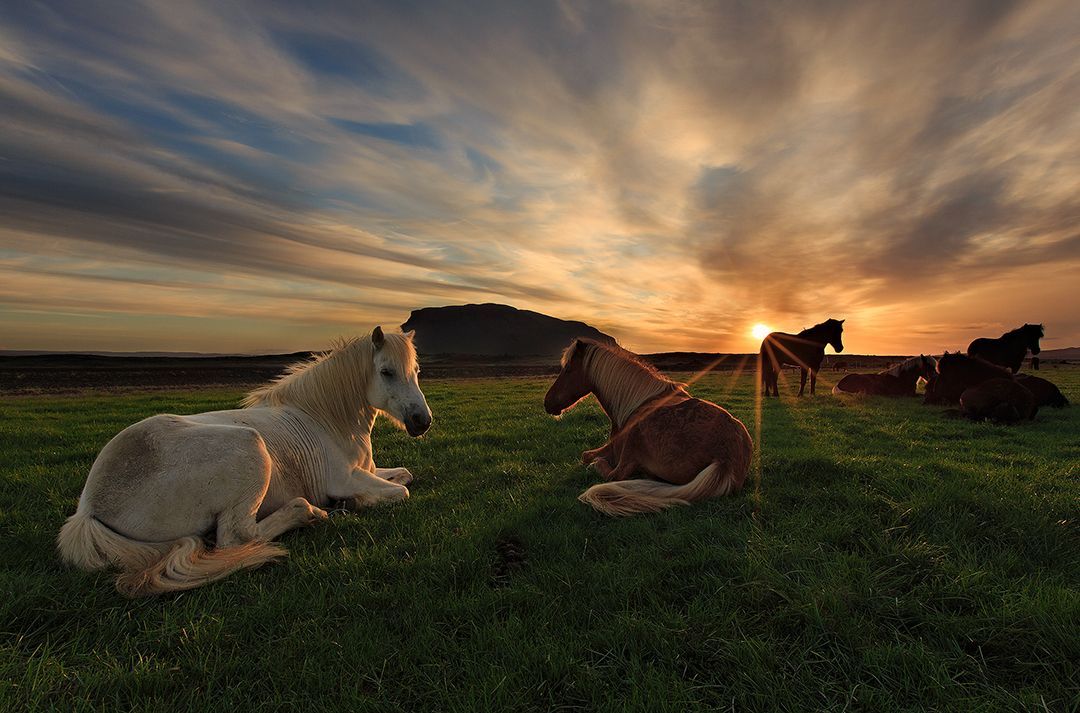 After an early breakfast we will say goodbye to Mývatn and have a long travel day through Iceland’s beautiful East Fjords. Here we’ll stop along the way to photograph and explore Dettifoss, in the glacier riverJökulsá á Fjöllum, flowing from the glacier Vatnajökull, and is reputed to be the most powerful waterfall in Europe. This thunderous fall has an average waterflow of 193 cubic meters per second. It is 100 meters wide and plummets 45 meters down to Jökulsárgljúfur Canyon. Along the way for lunch we will visit and photograph the farm settlement of Möðrudalur. Possible stops include Rjukandi Waterfall, Icelandic Horses or a cliff-side beach. We continue on to the small fishing village ofDjúpivogur with its charming harbor and beautiful surrounding volcanic hillsides. Here we’ll spend the night and have a chance at the amazing volcanic mountains that reach right down to the sea. 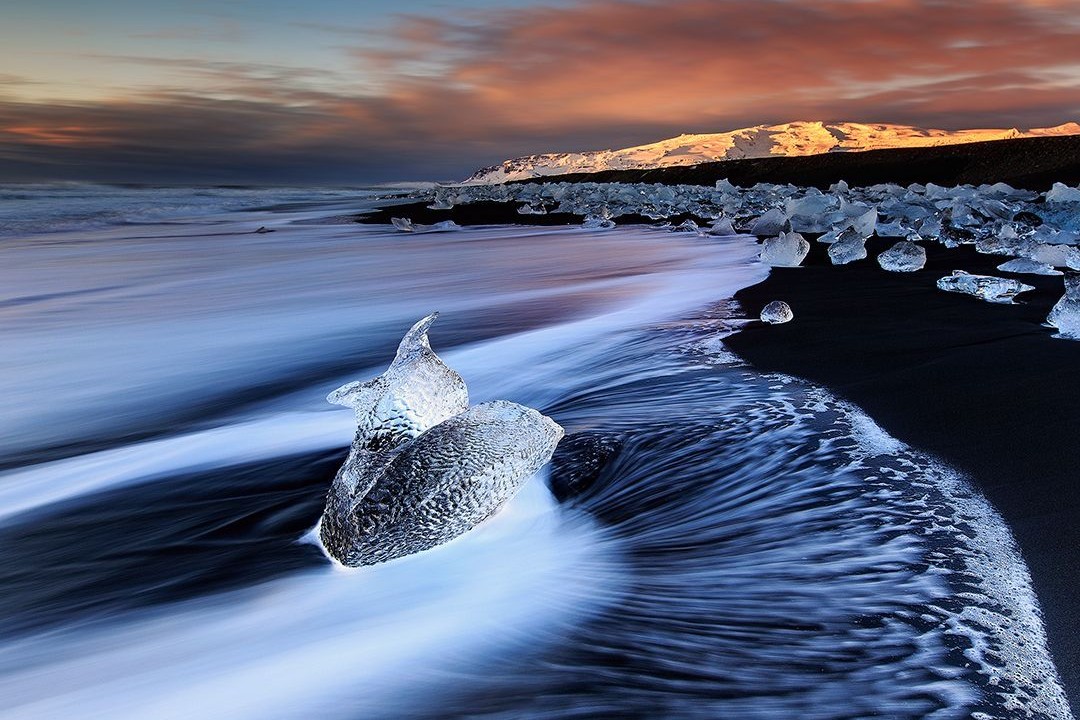 Days 8 and 9 – Iceland’s south coast, Vík and back to Reykjavik

We visit Iceland’s south coast with majestic waterfalls, glaciers, the lush beauty of the wide farmland and the famous Icelandic Horses. We travel from south-east to south-west on our way to Vík. We plan to stop at Hofskirkja, a beautiful turf-covered church. In the village of Vík, we’ll be minutes away from the Reynisdrangar black sand beach, with its amazing towers of basalt columns on shore and sea stacks just off-shore, which make great subjects for the golden hours. We stay one night here in Vik, and after breakfast we have our last day, which is the drive back to Reykjavik. We will stop at and photograph our last waterfalls: Skogáfoss and Seljalandsfoss. We plan on arriving back in Reykjavik at our hotel late in the afternoon. This evening we’ll share a happy farewell dinner together, followed by our final critique session of the tour. Our Midsummer dream will have changed the way you look at photography forever, with great memories of a country of fire and ice and good friends! 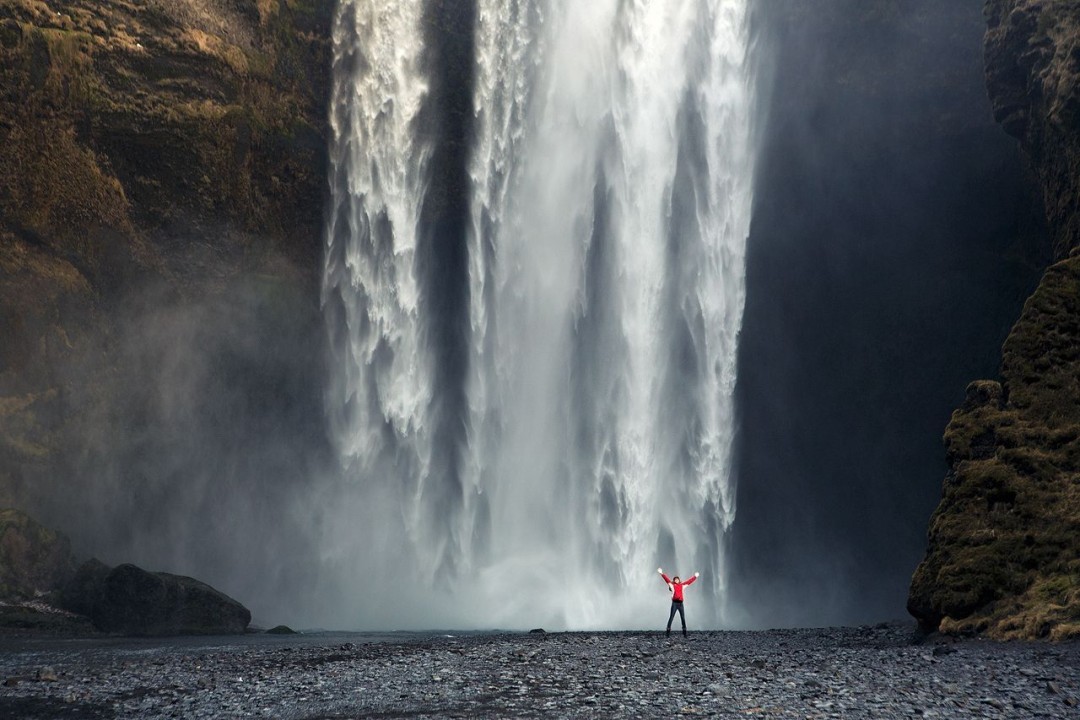 Days 6 and 7 – Jokulsarlon, the Glacier Lagoon

From Djúpivogur, we head towards Vatnajökull National Park, the remote eastern landscape of Iceland and Jökulsárlón, a glacier lagoon full of icebergs. This is the wild east where icebergs float out to the sea from Vatnajökull glacier float out to sea and are often washed up on the amazing black sand beach. The glacial lagoon where they float before being taken out by the river changes every day, as the icebergs shift, melt, and drift away. The blue ice and dark lake underneath the glacier provide some of the most spectacular landscape you´ll ever see, not just in Iceland, but anywhere in the world. Another great landscape is Vestrahorn Mountain, which we will shoot, weather and time permitting. Also here we will take a tour to an exclusive area that has one of the largest breeding grounds in the world of the Great Suka bird, and we’ll also have a second chance at photographing many nesting puffins and other bird life. 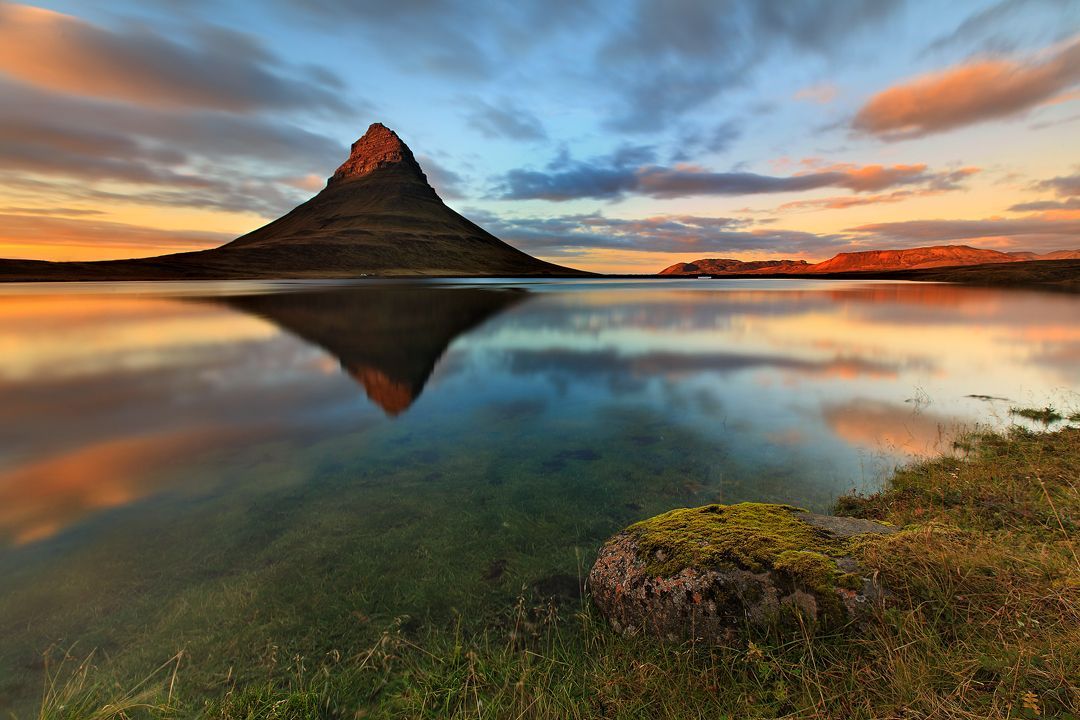 What’s Included: All transportation within Iceland (including air charter to Húsavík and our private Schooner), meals, snacks, soft drinks, double-occupancy lodging (single occupancy is available, extra surcharge, just ask us), and photographic guiding and instruction from four pros, from the time we meet on May 25th in Reykjavik until the time we say goodbye on our last day.

What’s Not Included: Airfare from your home to and from Iceland. Airport transfer from Keflavik Airport to/from Reykjavik hotel (easy and inexpensive). Travel and trip insurance (recommended). Alcoholic beverages. Tips for our two professional photographer guides . Anything else not specifically listed above in the “what’s included” section.

While we don’t expect this, we reserve the right to adjust the tuition of this workshop due to factors beyond our control, such as currency fluctuations, political action, governmental issues or the like. Additional terms and conditions specific to this workshop: Your deposit is a firm commitment, and is non-refundable, which is why we recommend trip insurance. If you need to cancel, we will try and fill your spot, but no guarantees are made on this and no refunds are promised. Please do not make air travel arrangements to Iceland until checking with us first.

© Marion La Pierre, Holland. All images are copyrighted and need written permission for usage of any kind